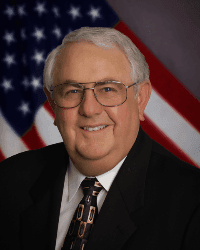 Besides serving as a Council Member, Chuck currently represents the City of Tustin on the Foothill/Eastern Transportation Corridor Agencies, Orange County Council of Governments, and Southern California Association of Governments (SCAG).

Chuck went to work with Hunt-Wesson Foods, Food Service Division in 1968 and retired in 2000 after spending 32 years with the company. He served as District Manager, Los Angeles District from 1975 to 1992. He transferred into the National Accounts Division where he solicited business from and then maintained several multimillion-dollar restaurant chains. He retired as Director, National Accounts on November 1, 2000.

Chuck served on numerous county boards and was honored as Tustin’s “Man of the Year” for exceptional service to the community in 1986. He also served as President of the Boys and Girls Club of Tustin in 1986 and is currently serving on their Endowment Board.

Chuck was a founding member of the Tustin Community Foundation and has served two terms (five years) as President. He currently serves on the Board of Trustees of Hope International University, Fullerton and was presented the prestigious “Spirit of Hope” Award for outstanding service to the university in September 2015.

Council Member Puckett has been seen as Santa Claus at the Enderle Center Holiday Kickoff Celebration for the last 19 years and has brought much joy to the children of the Tustin area. He has also volunteered with the Tustin Police Department Santa Sleigh program for the past 19 years.

He graduated from Pittsburg State University in 1965 with a BSBA degree with a marketing major. He served as President of the Student Assembly from 1964 to 1965. Chuck married Donna Henry in August 1965. He has two grown children and four grandchildren.

Chuck has more than 20 years of experience serving the City of Tustin as a Council Member or Planning Commissioner and is willing, eager and well qualified to serve the citizens of Tustin.